For context, please see the two other posts. Here's the first one, and here's the second one. You'll see how the thinking evolved from these posts.

I had a conversation with @ctietze about the Folgezettel technique.

He told me that there are two problems with the current branching method of the Folgezettel, as follows:

He discussed these issues with me with great detail (even though I asked for a short answer) and I'm really grateful that he spent the time to do so. According to him, two branching issues has been a great limitation of the Folgezettel technique, and perhaps they're all the more reason Christian and Sascha don't advocate it.

Anyway, the bigger trap here is that these two problems don't surface until you've worked with your Zettelkasten for a while; you could end up wasting serious amounts of time once they do. In Christian's words,

It's still limited, but the limits surface later. It's also still suffering from the same design problems: the beautiful tree of today will be torn apart tomorrow, and you have no way of getting back to the associations of today's tree without taking note of it, too.

I strongly agree—I wouldn't have found it if I didn't do any thought experiments and real ones using a mock collection. And that's only for the first problem. Christian pointed out the second problem before I can even find it. Nonetheless, developing a potential solution comes from solving these two major branching problems at once.

(The hierarchy problem was solved already, so I'm going to skip that out for a bit. Short, contextual summary: "1" and "1a" shouldn't be treated as a parent-child relationship, but rather as a sibling relationship. Hierarchies could happen, but not exclusively so)

Why worry about Folgezettel, anyway?

Some of you might think I'm too crazy to even create a couple of discussions about a seemingly outdated technique. But I get it. @sfast has already debunked much of the arguments for the Folgezettel.

But I tried keeping a UID-system and I found it hard to maintain it using structure notes alone. Of course, that's just me. And that's why I care about reviving this old technique. My thinking was, "If Luhmann can use this flawed technique to work with 90,000 physical notes, then perhaps I can modify this one to make it work better in a digital system."

My hypotheses is that:

It lessens the dependence on structure notes, because the notations _supposedly make it easier to find connections just within your list. (more on "supposedly" later)_

That said, I still find value in using structure notes in my system--that's undeniable. For example, when I form relationships from the branch 1a to 1a1a1a and the branch 1b to 1b1a1a through a direct link, I get a relationship of relationships. (Let's call that: relationship^2)

These relationship^2 almost always emerges an interesting topic. And since this connection isn't intuitive at first glance, structure notes help elaborate these connections.

Anyway, this post will tell you how I came up with Note Sequence 2.0 (for a lack of a better name)--a modified version of the Folgezettel technique that allows you to:

I hope I'm making sense. So let's start with the first problem.

Explained simply, _binary _means two states, but applied in branching, it means you can only branch out two times.

See, the method of Folgezettel described in niklas-luhmann-archiv.de looks like this:

This was the exact method reportedly used by Luhmann. But when I started working on it (after not thinking about @sfast's arguments well enough), I stumbled upon what we call the binary tree problem.

Here's a visualization. (Please don't mind the ugly faces; they helped me survive graphic creation I hate so much) 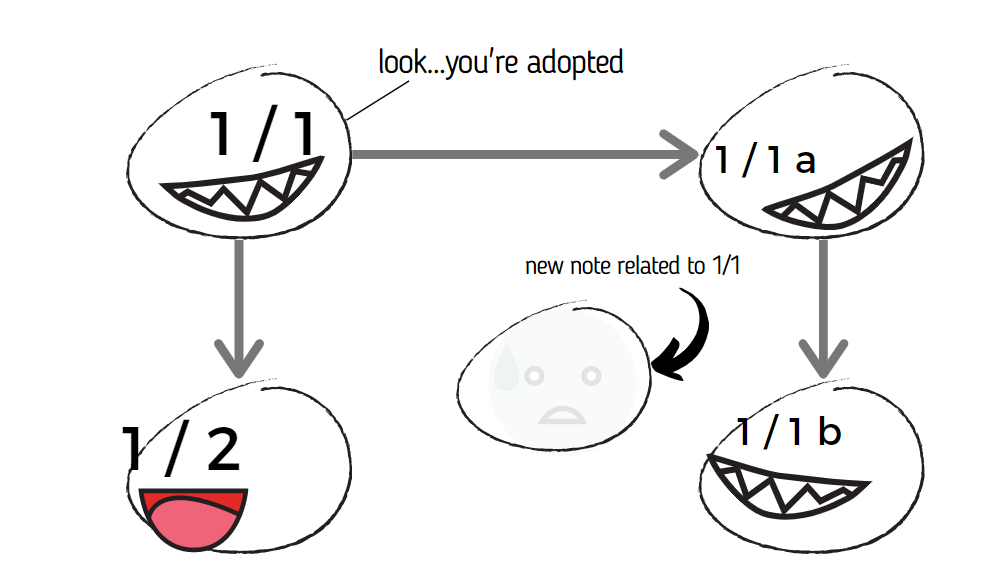 A note with two Folgezettels already cannot be continued by another Folgezettel.

You can get creative to solve the binary tree problem like I did: "just create a new note sequence, then connect them together" — but that defeats the purpose of the Folgezettel (recall: to easily see the flow of your ideas right at the file list). You might as well use UID's.

(WAIT don't get me wrong, I DO see the value in the UID system and I'm not discrediting it just because I'm developing a seemingly "opposed" technique. I just wanna get that out of the way. UID's and Structure Zettel are proven methods to organize a Zettelkasten. Anyone who attacks that argument will get burned slowly by afternoon sunshine.)

But let's say you somehow tried to solve the binary tree problem by using a different character set for a suffix. 1/1a and 1/2 are already taken, right? It would look like this: 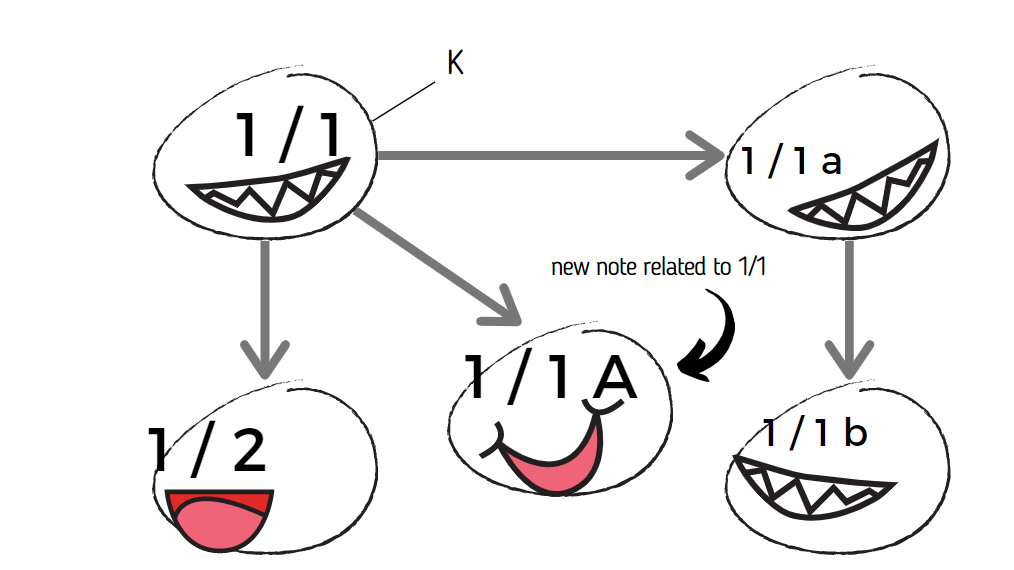 Okay, but how long can you do that? Four times, using: 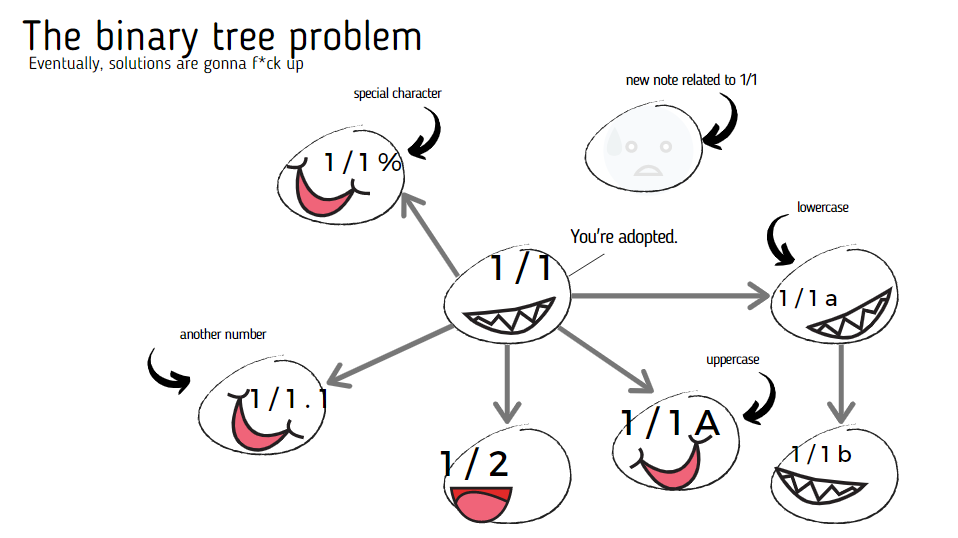 Clearly, as long as you incorporate a binary tree using the Folgezettel, the limited branching problem is inevitable.

Therefore, my solution is, if you want to make sense using the Folgezettel, instead of only having binary trees, I have to make it work such that we have a multiary tree. (Branching multiple times)

Coherently, the brain isn't binary—it's also multiary. One thought leads to many other thoughts. It wouldn't make sense to use the binary tree structure of the Folgezettel. But we will get to that later. Let's move on to the next problem.

The proximity problem is like the son of the binary tree problem. Except it happens between two already linked notes in a Folgezettel.

See, if we accept the assumption that 1/2a is linked to 1/2b, then all the further connections of 1/2a will only push 1/2b further down. This is how it looks like: 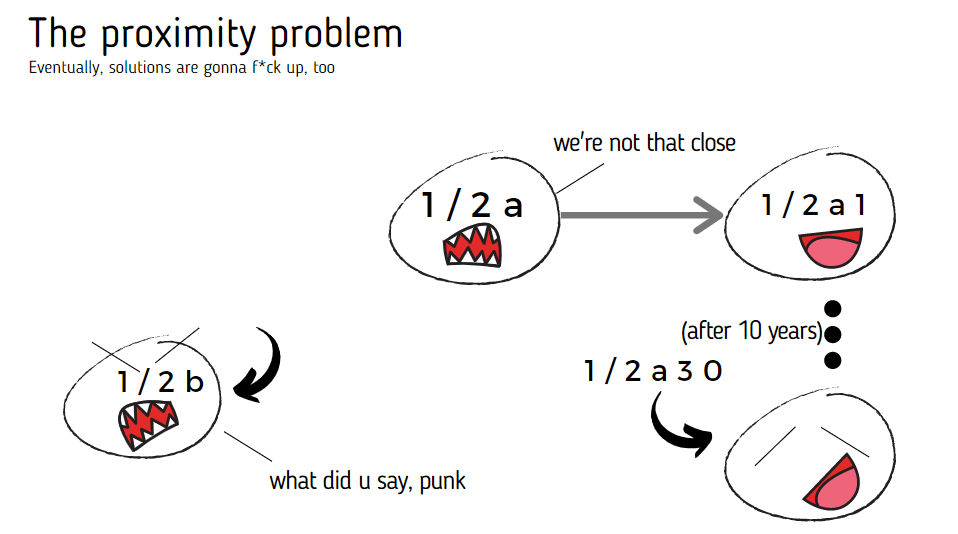 I've found solutions for this online, but it doesn't really solve the problem at its root. Again, this defeats the purpose of the Folgezettel since you want to see the continuation of your ideas right away.

"But we're using digital tools now!" Alright, I get it. But hey, we haven't even solved the first problem yet.

If we want to use the Folgezettel digitally and make it work like the brain, then we have to remodel it such that these two problems don't exist.

…as prescribed in the main website niklas-luhmann-archiv.de, then the binary tree problem becomes inevitable. It is the root of our problem here--THIS prescription is what make Folgezettel limited to a binary tree.

Just to quote Sascha, "Should you use a technique just because Luhmann did it?" my answer is no. That might sound contradictory because I'm using Folgezettel, but this isn't copying Luhmann—I'm improving upon what he did.

With that out of the way, let's ditch that old, flawed technique (Sorry, Niklas) and let's change the rules into this:

But if we adopt that notation, then the first number originally designated for the "note sequence number" actually becomes useless since 1.1 and 1.2 isn't related anymore. (Don't be confused with 1.1 and 1/1--they're the same) We can simplify it to:

And just by changing that, we actually solved the two problems at once.

In the old version, only 1a1 and 1b follows 1a; that sucks. Here's what it looks like: 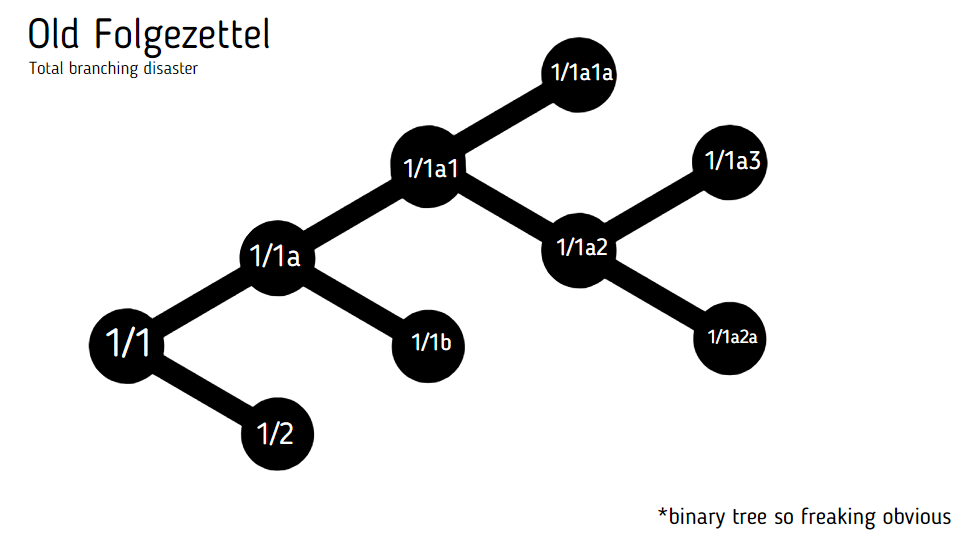 In the new version, what I did was this: 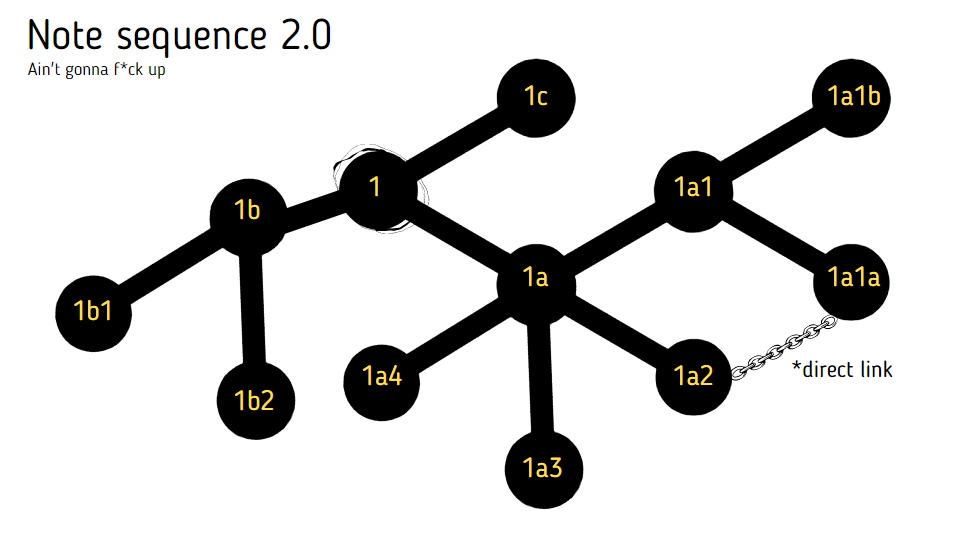 (Note: Please don't mind that I put direct links in this one. Both can have direct links.)

So far here's what I've accomplished by breaking the governing rules for the technique:

First, as promised, Note sequence 2.0 made it easier to search for connections through search. Searching for a note automatically shows you what comes next, albeit using the alternating letter-number scheme limits the number of branches you can make. Again, you can extend this functionality however you want, perhaps by using 1-a-01-a; it allows you to use letter branches 26 times, and number branches 99 times. Here's a visualization:

(See the Note Sequence 2.0 image above for reference) 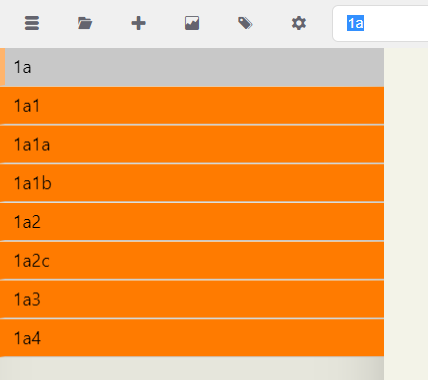 As you can see, searching for 1a makes it easy to see what follows it in the notated sequence. Let's try that for 1a1. 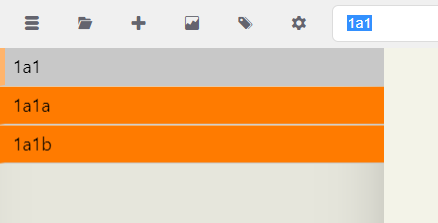 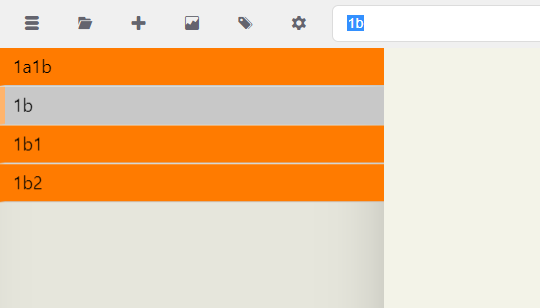 You might say that the last one also showed another note that has "1b" in it, and therefore "this doesn't work." Nope. It still makes it easy to see what follows 1b.

And second, avoiding the connection between 1-2-3-4 as well as 1a-1b-1c and so on allowed us to kill the binary tree problem and the proximity problem at once.

"No, you didn't solve the proximity problem!"

It seems that way, but then using search actually allows you to navigate through all proximate notes smoother than before. If you use the old Folgezettel, searching for 1a would NOT make 1b appear in the first place, much less notes that follow it (1c, 1d, 1d1, 1e, etc.).

Using 2.0, however, typing a notation (say, 1a) reveals ALL the following notes. All you have to do is type the next characters.

One caveat I found is that you can't use this method for Physical Collections anymore. Well, I guess none of you would do that, tho.

P.S. I'm yet to create a comprehensive post on the new Folgezettel technique (i.e. what principles it followed, what underlying assumptions/rules are) because of grad school. Sorry for that, but I hope this will suffice.