The case for a digital folgezettel

alkhan
March 2020 in The Zettelkasten Method

Folgezettel is seen only as a solution to the physical nature of the Zettelkasten, and that UID's have a direct advantage over it.

While true, it doesn't mean that you should only be exclusive to one method; they can actually be complementary.

This essay makes the case that a Digital Folgezettel is indeed a helpful tool for beginning Zettlers. (whatever you call 'em)

When I started using the Zettelkasten method, I just used the UID system as instructed by @ctietze and @sfast in their overview articles. This worked fine, and as most of you have already experienced, it's awesome to use in a Digital Zettelkasten. But I felt like I'm constantly having a problem with connecting my notes, even though I already have a pre-determined workflow of connecting them based on the Types of Links article:

My priority of connecting new Zettels goes like this:

That worked fine, but I felt like something's off for me. (as a newbie Zettler)

I figured that the problem with using UID's alone is it requires you to either create an index for your promising trains of thought, or go through a rabbit hole inside a certain note just to see your thought trains. In other words, it's hard to visualize your thought trains in a UID-based system since it isn't organized in any way.

Some scripts are available in the forum for visualization and backlinking, but they still didn't feel right for me; I was still struggling to develop my thought trains in an easy way. But don't get me wrong; it's definitely worth your time to find a connection inside the Zettelkasten. I just felt like it could be faster. (Experienced users of UID systems don't experience much of a problem and seem to love the complexity, though.)

To be fair, UID systems make it easy to go through direct links because all you have to do is click on them. It's maximum flexibility.. Folgezettel systems don't have this advantage; you still have to manually search for the mentioned direct link before you can get to it. For example, when {1a} links to {6b}, you still have to search for {6b} inside your archive and continue from there. This isn't a problem when you're working with a small archive, but when it gets bigger, (and it will) it becomes a black hole that sucks the hell out of your short life.

So, to solve this problem, I tried to get the best of both worlds; a hybrid method that combines the ease of visualization of a Folgezettel and the wiki-linking of digital UID systems.(Hat tip to @argonsnorts)

In case you forgot, Folgezettel means "note sequences." They're what Luhmann used (initially, I guess? Not sure.) to navigate his physical Zettelkasten without complaining at least once. If patience determined the size of his pecs, he'd be a goddamn piece of meat who walks funny.

Aside from bodybuilding jokes, because Folgezettel is arranged alphanumerically, it makes thought trains easier to visualize; a useful trait especially if you have a physical archive. In a Digital Folgezettel, though, I found it helpful to easily see existing trains without manually creating structure notes for them. See for yourself: 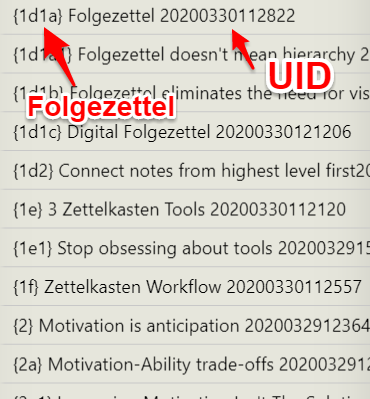 And inside some notes, you'd see that I link using UID's:

So by clicking on it, I can see what other notes connect to this one.

My point is, linking doesn't end in the Folgezettel; rather, it shouldn't. You should always find links to other notes whenever possible. As you've seen, that act of linking creates surprise when you connect, say, the thought train from Zettel {1a} to {6b} as shown below: 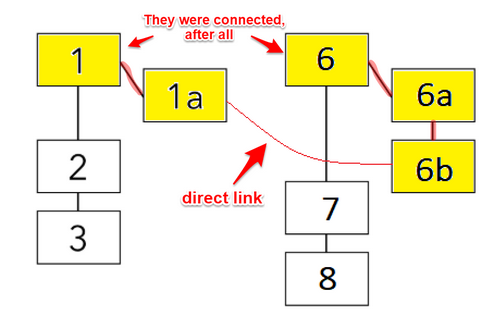 So yeah, Folgezettel isn't just about creating note sequences, it's also about connecting one thought train to another. By the way, for those interested, I got this idea from Daniel Ludecke's presentation on the Zettelkasten Method.

But just to be clear, let me tell you that Folgezettel does not mean hierarchy. When I saw argonsnorts post about it, I thought a Digital implementation of Folgezettel was a hierarchical method of creating notes and combined the decentralized characteristic of UID-systems. I even commented on it; but I'd be wrong.

After seeing that, I reviewed how the Folgezettel worked, and then finally understood that it actually meant a direct, obvious connection between notes. Here's a picture of it from the zettelkasten.de blog, for your convenience:
(

In the image above from this article, you'll see that {1a} and {1b} are Folgezettel to {1}—they continue a sequence from note {1}. Obviously, "banana bread" and "flour bread" doesn't necessarily connect to each other. That shows that Folgezettel doesn't mean hierarchy; it simply states a direct, obvious connection to the note it branched off of.

With that out of the way, here's what I think is the best way to implement a Digital Folgezettel. For example, I have notes like:

The numbers {1} {2} would represent new trains of thought. That's because I've created a rule that: new numbers don't directly imply a connection. This is especally helpful when finding a topic to link to. If I just saw "the word Zettelkasten" on number {1}, then I'd instantly know it's going to go down the Zettelkasten rabbit hole. In that sense, the size of the Zettelkasten doesn't become a problem; I can easily move from one train to another by looking at the numbers.

Since discovering this method, I've been addicted to working with my Zettelkasten. Actually, I just accidentally wrote this article while I was working on my thoughts. (That almost doesn't happen in real life.)

Also, I found it really easy to implement the Folgezettel + UID system in Zettlr. (I use Windows, folks.) I just click on the "sort alphabetically" icon and it's instantly organized into easy-to-follow thought sequences. Cool stuff. For The Archive users out there, you can check out the post where I got this idea here.

Anyway, let's see how this method would hold up in the future. If I run out of letters, I'll use the Greek alphabet. Numbers don't run out, obviously.

This essay was originally published at my site, Improveism.com

P.S. Please let me know if there are any factual errors, aside from that, let's have yet another insightful discussion!