alkhan
May 2021 edited May 2021 in The Zettelkasten Method

Lately I've found Bloom's Taxonomy interesting — Bloom apparently did it to save time in making annual examinations (according to my source, at least) and consequently, it led to a "common language" for education.

And without a common definition of how well students understand the material, making exams that test understanding would produce large variability.

How do you even know when students "really understand" something?

So what Bloom's Taxonomy did was give a comprehensive set of criteria at which teachers could determine whether a student could "really understand." In the latest revision, discrete levels of 'cognitive processes' were used: 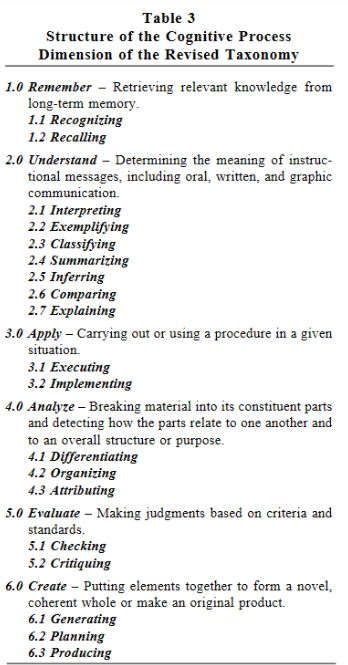 The higher up the students are in the cognitive process dimension, e.g. if the student can "apply," not just "remember," the 'deeper' the learning is. (I've found this taxonomy useful in my personal learning as well.)

Of course, it can be argued that the cognitive processes may very well be a continuum rather than a bunch of defined levels, but the point is that Bloom's Taxonomy has led to a common language in education that clarified what it means when students "really understood" what they were trying to drill into their heads.

In the Zettelkasten Method, I realized that there may be much overlap between the concepts to create a taxonomy that creates this 'common language,' as in Bloom's Taxonomy.

But, I feel like a note typology, at least, may be especially useful to beginners. (Note: Not trying to say I'm intermediate/advanced or something)

Why beginners? My motivation here is that when I started using the Zettelkasten method, I did feel the need to have clearly defined "types of notes" — a sort of recipes to follow — so that I can adopt the principles without getting overwhelmed. I'd slowly discover my own "note typology" after a year, but that's only after I was able to connect the principles, my observation of how others were doing it (by lurking in the forum, stalking @Will's post like a creepy madman, and binge watching Christian process "Range by David Epstein" at least 3 times), and my own experience in making chaotic notes.

My hunch is that having this typology would reduce a beginner's learning curve, and help them figure out how to integrate principles into their work much better.

Now, for the current notes I have, this is my "typology":

As much as possible, I avoid using fancy terms to avoid confusion, and just call the note what describes it, in plain language.

So I have a question for the more experienced:

Do you have your note typology? Do you think we should agree on a common language for the type of notes we make? More importantly, do you also think that having a typology is even helpful?

Personally, I feel like it would put everyone on the same page, especially when posting on the forums. But at the same time, I also realize that "getting stuck on terminology" is also a trap — but that most likely happens when definitions are too ambiguous.