Steve625
October 2021 in The Zettelkasten Method

"A Zettel is a Note."[1] I clearly remember the first time I read this line. The term is German, and the whole idea of a Zettelkasten was a foreign subject. Thankfully, I could wrap my brain around an index card file or “slip-box,” because I had made a feeble attempt years ago to keep my growing pile of notes in just such a box. And because I was old enough to have used a library card file to look up books, I felt I might be able to handle this methodology for note-taking created by Niklas Luhmann.

My first recorded journal entry is around age 5 ---just a few lines of neatly penciled words describing what I did after school. I have scattered notes and journal entries through junior and high school; however, it wasn’t until I read The Majesty of Books by Stirling W. Sill (around age 21) that I went full in on note-taking and keeping a journal.

I went digital somewhere in my forties and by the time my note-taking slowly ground to a halt, I was in my late fifties. My system halted at about the 30,000 entries mark, primarily because it had become so unwieldy that I couldn’t find anything. Journal entries by date were easy to find, but not necessarily ideas expressed in the entry. I had developed a reasonable way of tracking my hiking adventures by State, County, and quadrangle, but I couldn’t apply the same tracking concept to my notes. Keywords were more confusing than ever-swelling to around 1,400; listing such general references as to be utterly worthless. The same was true with Tags.

In May of 2019, I stumbled upon a book entitled How to Take Smart Notes, by Sonke Ahrens. I came close to buying; however, a review said, “save your money and visit the website: Zettelkasten.de.” So I lurked on the website, reading blogs and the forum before joining October 2019. I’m not an active participant in the forums, but I felt an instant kinship with Christian and Sascha as many of their early blog posts included several of the same books I had read and taken notes on.

The Zettelkasten methodology seems simple enough, and I won’t describe the dozen or so attempts I’ve made to get the methodology to work within my existing notes. Unfortunately, I have discovered several ways in which it doesn’t work and it is frustrating to have to unravel an attempt at something that I knew should make my life easier, not harder. However, having arrived at a smooth-running platform makes me no worse for wear, even given the two-year trial period. I knew a Zettelkasten is what I wanted, similar to how I knew that David Allen’s Getting things Done methodology was the way to organize my personal and work life. And just like GTD, creating a working Zettelkasten was taking time.

I debated starting from scratch seriously, but I had thousands of notes with which I had a profoundly intimate relationship. I had spent years reading pondering and memorizing many of my favorite notes through a form of spaced repetition. I was jotting down personal ideas, experiences, and my prose with each review. I also had thousands that would probably fall under The Collector’s Fallacy; however that fallacy doesn’t bother me as much as knowing I was leaving too much unsaid on the table.

I dismissed Structure Notes right away as too much busywork. Argonsnorts in the forum called it “housekeeping, and man, I really didn’t want to do that.” [2] I could relate. I tried Luhmann IDs (twice) to no avail. A fixed ID is required to reference each note, and I had moved from title to Luhmann IDs before finally settling on Date/Time UID.

My biggest roadblock was the Zettel note itself. I have dozens of examples that I copied from the forum group, and try as I might, I couldn’t get the hang of writing this simple piece. A Zettel note is the backbone of a Zettelkasten, so I knew I was in serious trouble. The problem with writing a Zettle note, like a Structure note, seemed so redundant to me. I already had the notes; I just needed a way to tie them together.

Enter “nonlinear formats for idea development.” A note I created in March 2020 from the website Lesswrong and written by abramdemski. The blog’s title is The Zettelkasten Method and is listed as a whopping 62 min read. [3] Most of the blog is redundant if you are familiar with the methodology, but what caught my attention as the author described several tools he had used to implement the method. Buried in the 62 minutes were 28 words that have become the heart of my implementation.

"Workflowy introduced me to the possibility of nonlinear formats for idea development... Suddenly, I could continue a thread anywhere, rather than always picking it up at the end."

I don’t use Workflowy; however, the term “nonlinear format” gnawed at me, and I had made a journal entry on that date saying, “in my mind’s eye I could see me making notes and following links from thought to thought.” Truthfully, if I had said ”following links from note to note,” I probably would have solved my particular puzzle faster than I did.

My notes are now fixed, and I call them Reference Notes. They follow the format beautifully illustrated by forum member Gescho in his post The Zettelkasten as a Lattice of Thought Strings. [4] My software allows me to hard link notes to note and color code the “sequential notes” with green. (TheBrain.com)

The individual notes follow the existing formats discussed within the forum, i.e., UID, Title, (I don’t use the date of creation because my software keeps track of that), (I also don’t use Keywords or Tags for reference notes). And, of course, a citation or reference.

What has changed is the way I write a Zettel note itself; rather than draw to my Zettel note all the various ideas scattered across my web. Instead, I let the Zettel note chart a course across the web through links. I’ll explain.

In my archive, I have a reference note entitled A Zettel is a note.

The note is a quote from Sascha’s blog; in the section are two distinct topics. “A Zettel is a note,” and the archive for your Zettel notes is called a “Zettelkasten.” Bear with me through the elementary explanations. I then created a Zettel note called “A Zettel is a note,” which I know is not very original. However, the Zettel note is only an Entry Point to access the thought string or discussion thread (using Gescho’s fantastic imagery once again). 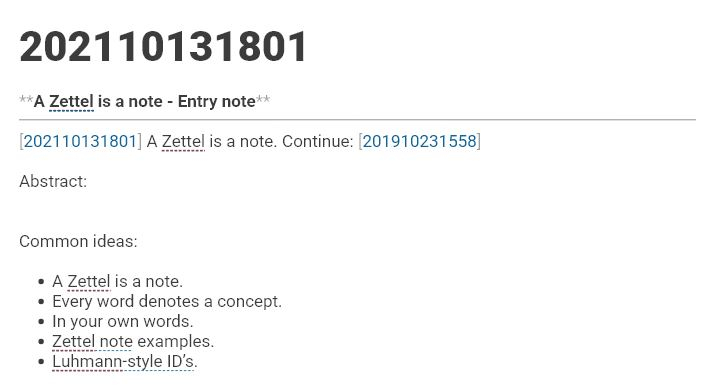 Once I access the entry note, I have three options. First, continue to the following note sequence via the UID link. In this case, it is the first note regarding Zettel’s that we looked at previously. It is on this note that I make my observations and start my Zettel note. 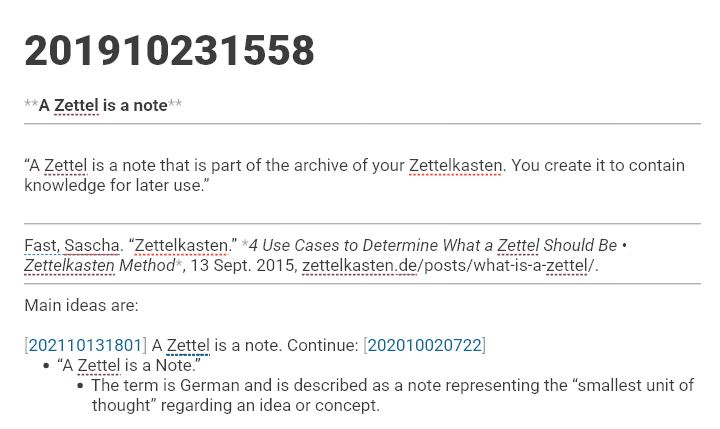 Second, I try to find some common ground with other notes, and if appropriate, write in a “common idea.” If a common idea doesn’t fit, I create a new one or write my observations. One could argue that I am making a Structure Note inside my Zettel note, which is probably a valid argument. However, I don’t link individual thoughts, and the software keeps track of all associated ideas through automatically created backlinks. 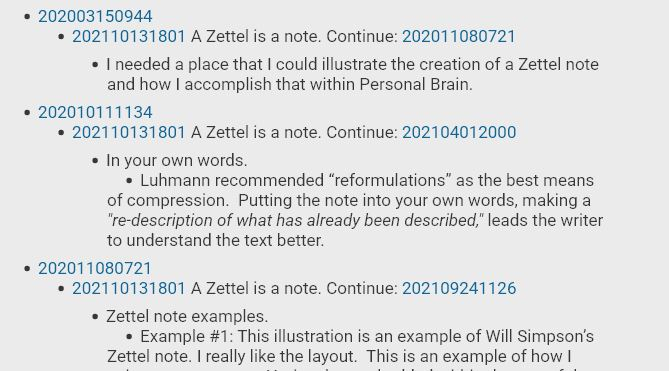 Third, when a quote discusses more than one topic, I repeat the process. If I have an existing Zettel thread, I scroll through the backlinks until I find an appropriate place to insert the new note or not finding one, I jump to the last Zettel note which reads: “Continue: end” and add the new link. 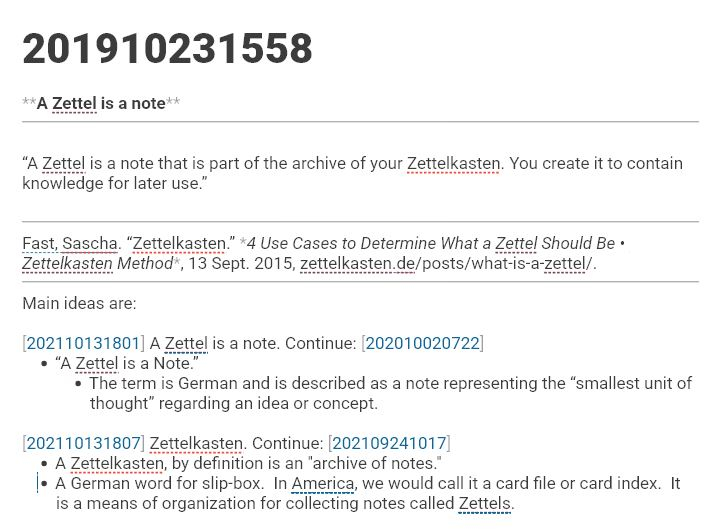 In conclusion, I would like to reference two ideas from Eva Thomas.

Being able to create a nonlinear path helps facilitate this journey. Serendipity occurs when two paths cross on a note which is both surprising and enlightening. Stephen King said it best, ”two previously unrelated ideas come together and make something new under the sun. Your job isn’t to find these ideas but to recognize them when they show up.”[7]