Confused about Layers of Evidence

I've been processing papers on psychology lately (on retrieval practice and reading comprehension) but I'm having trouble implementing the concept of "layers of evidence" as described in https://zettelkasten.de/posts/layers-of-evidence/.

In the post, @sfast said: (my emphasis for context)

The next layer of evidence is the interpretation of data patterns. The phenomenological layer meant you describe what you saw. Here, you interpret why you saw it.

Going down to the examples:

Phenomenon: Serotonin is part of the physiological substance that constitutes status. Cooperations and alliances are integral part of status.
Interpretation: Serotonin is a regulator of negative emotion and emotion in general can be optimized via dominance and cooperation.

Phenomenon: One study showed that some training can increase the relation of fat to carbohydrate you use for up to 24 hours.[^jamurtas2004] Another study showed that in overweight people, fasted training in the morning results in a ad libitum reduction of calories reduction of carbohydrates.
Interpretation: There is an acute effect on the metabolic flexibility that is distinct from the general metabolic flexibility one has and that is used as a model in current science.

I won't place all the examples here, but to me it seems that most in the "Interpretation" layer are "claims" and the "Phenomenon" layer would be the "evidence". But I got confused after seeing "interpreting why you saw the pattern" and "the concept of causality" in these examples. Specifically:

Does that mean that the interpretation layer is the one that explains the pattern? Or is it simply a generalization of the phenomenon? In the latter case, how do you know if you're generalizing correctly? Do you always need a theory or a model to do this?

Now in the paper I've processed recently, I struggled to make zettels because there are simply too plenty of interpretations to begin with — BUT at the same time, none of them felt like "proper" interpretations.

For example, one of the patterns was:

So I had a couple of notes to interpret the same thing: 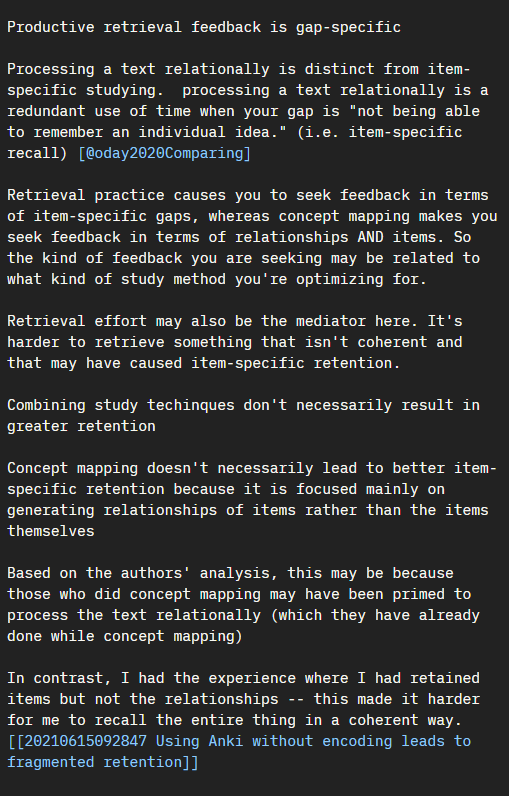 ...but none of the notes seemed good enough to turn into a zettel, since I am not an expert on the topic. What would you recommend me to do at this point? Examples and explanation of implementing the second layer and especially the third layer would really help.