improveism
May 2020 in The Zettelkasten Method

Back then, I thought Folgezettel records the sequence by which ideas unfold, and that Structure Notes only organize the invisibly unfolding ideas created from the interlinking done outside of the sequence. Folgezettel sure made some connections glanceable, thus, I deemed it promising...up to a certain point.

While working with my Folgezettel, I found that without structure notes, these sequences would lose their implicit meaning in time.

Alright, I'm not making sense. Let me elaborate to give you a bit of context.

I'll start with what I've developed: the Folgezettel 2.0. (F2) when you try to link to a note in F2, the ID itself "activates" the previous notes. This is a feature of the notation itself. In the F2 technique:

In contrast, I've started to realize Structure Notes "activate" ideas better than note sequences, albeit that only happens at the structure note level rather than at the note level. To put it in a concrete way, when you link a new zettel to an old one inside a structure note, you'll be able to see other potentially relevant links in that structure zettel — not to mention they're already presented in a logical sequence. (Which F2 will lack when you read syntopically)

A linking workflow using Structure Notes is like entering a bar, seeing one friend at a table, and then meeting his friends you'll eventually get connect with; you're not going to be friends with all of them, but potentially, yeah. It's still consistent to how I've designed F2.

The way I see it, linking to a note in F2 is more like getting married, rather than meeting a friend at a bar table; when you become connected to someone in a family, the whole lineage becomes connected to you, too. (and you have no other choice, man) Here's what it looks like graphically: 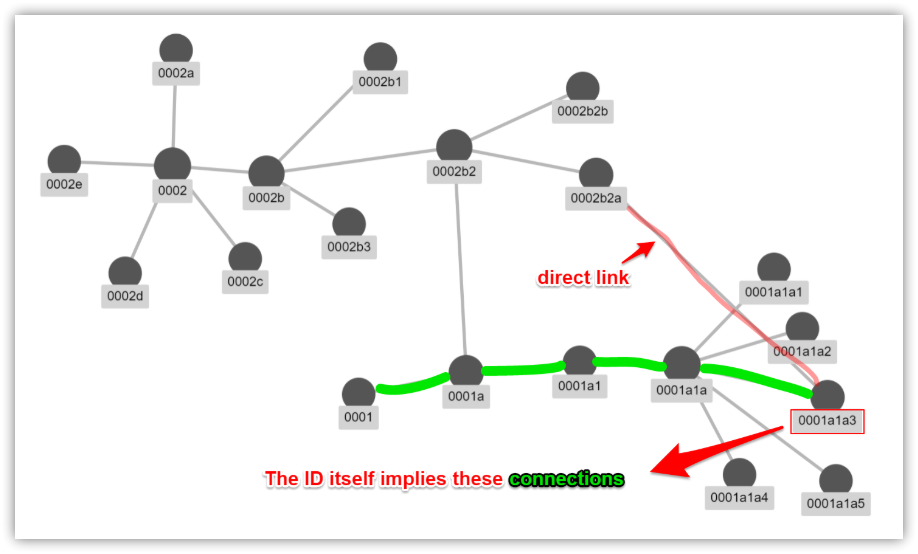 So far, so good. So what's the problem? The problem is that in the first place, I've created this technique to lessen the dependence on structure notes in "activating" potential relations. The common argument against this is the topic of "meaning".

You see, I've always thought of a Zettelkasten as a miniature Internet. (except without dogs that have social media accounts) Because of that, I looked up a couple of articles by Tim Berners-Lee, where he discusses about links and all. Here's what I found out, and what @sfast has been saying all along.

Links themselves don't carry meaning unless you give them. In F2, note sequences don't have "meaning" by themselves, but the way they're sequenced allows you, the creator of the sequence, to give meaning to them — in other words, that's called implicit meaning.

On the other hand, when you link to another note and describe how they're connected, you give explicit meaning. That's exactly what happens in the Structure Zettel or when you link directly using a wiki-style link and explain how a note is connected to each other. (Not to mention you can arrange their sequence to follow a logical flow) To quote Berners-Lee:

Also, the inevitable fact is that the direct links from/to one note accumulate over time; they would eventually outnumber the note sequence branching, and so it would still depend on structure Zettel. (or hubs, as Luhmann called it)

Lastly, structure notes allow a Zettel to have multiple roles (what Sascha calls taking part in multiple hierarchies) and order them in a more logical, argumentative sequence. In contrast, F2 allows a note to be part of only one sequence — just like its predecessor, Luhmann's Folgezettel. Meaning, there could only be one incoming link (also called in-degree in network theory) and multiple outcoming links.

I'm always saying that the ZK should work like a damn brain, but while the lacking network properties can be resolved by conjoining Folgezettel and the Structure Zettel, the structure zettel still becomes a requirement because of the aforementioned issues.

If Folgezettel were my friend, you'd say that he's experiencing existential crisis right now — preparing for his revenge against me and my clan… (Sorry, man.)

Ironically, I've learned how to use structure notes properly by experimenting on the Folgezettel technique. Perhaps it's because of the need to solve the gaps in the Folgezettel, like what happened to Luhmann.

I leave it to Sascha and Christian to end this war -- it's something the whole community needs. The most usual entry point to the Zettelkasten is Ahrens' book, which discusses Folgezettel, so I think that creates a lot of confusion for people.

The other one is Roam Research. Frankly, I don't really think how most people use Roam resembles a Zettelkasten at all, but if they can improve their productivity using interlinked notes, then more power to them.

Anyway, my efforts now lean toward streamlining the workflow, leaving some questions:

P.S. @sfast, @ctietze Thanks for your guidance on this topic, it made my experiments quicker. And I have around 300-400 real notes, I think. I deliberately didn't abandon it right away to discover what happens and hopefully gain the same understanding of Folgezettel and Structure Notes. Whether it worked or not is a win, anyway.

I write about unconventional self-improvement advice at improveism.com